Chief Pete Edochie, is a veteran Nigerian actor. Edochie is well known for his acting prowess and professionalism. He is undoubtedly considered and revered as one of Africa’s most talented actors to have ever graced the screens.

Edochie has received several awards and honors throughout his career. Two of his sons also took after him as actors and have lived up to the name of their father.

He has been honored with an Industry Merit Award by Africa Magic and Lifetime Achievement by Africa. The Nollywood industry cannot boast of renowned actors without reference to the popular Pete Edochie.

Actor Pete Edochie has 6 children together with his wife Josephine. He has 5 sons and a daughter. Two of his sons Yul and Linc took after him as actors. His 5 sons are; 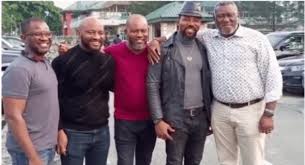 Prof. Gyampo advises government on sacrifices after the 2023 budget statement

Coverghana.com.gh is your home of authentic and well verified Ghana News. We also cover news on the entertainment world. Enjoy your reading. Contact us on +233545238073 via WhatsApp
Contact us: coverghananews@gmail.com
© Coverghana Media Network - 2020